Congress shall make no law respecting an establishment of religion, or prohibiting the free exercise thereof; or abridging the freedom of speech, or of the press; or the right of the people peaceably to assemble, and to petition the Government for a redress of grievances.
United States Constitution
Bill of Rights, Article I
September 25, 1789
On September 5, 2008, the Interior Board of Land of Appeals (IBLA) dismissed all three appeals regarding BLMs new management plans for the Nevada Wild Horse Range (NWHR) wild horses, burros and their habitat based on the following three considerations. (Click Here for IBLAs Decision).

*Only those members of the public authorized within the Nevada Test and Training Range have a right to appeal,

*Despite over a year of intensive dialogue, multiple submissions of public comments regarding BLMs management and proposals as well as hundreds of pages of documents clearly illustrating both malfeasance and violations of accepted standards for humane treatment of the wild horses, IBLA ruled the appeals failed to show how I or the public was adversely affected,

*IBLA could not issue a decision on the “emergency removals” of the NWHR because only “verbal” orders were given to remove them and even though BLMs attorneys submitted evidence themselves that BLM took the wild horses and burros, according to IBLA, BLM actions could not be challenged due to lack of an “official” signature.

So just who is this Interior Board of Land of Appeals?

IBLA is a branch of Department of the Interior (DOI) with appointed judges by the DOI and set up as a quasi-legal administrative court. Officially established in 1970 under the Office of Hearings and Appeals, it was founded to provide oversight regarding legal compliance of agency actions.

It's authority began with the passage of the Administrative Procedures Act in 1946 and then expanded in 1966 through P.L. 89-554, commonly known as the Freedom of Information Act. In more bureaucratic terms, it is also known as Title 5, “Government Organization and Employees” but its umbrella also includes such diverse segments as Indian Affairs: Laws and Treaties, oversight of finances in relation to public resources, conflict of interests regarding government employees as well as the current hot topic of the FDIC (Federal Depositors Insurance Corporation) under 8000- FDIC Miscellaneous Statutes and Regulations, 554-Adjudications. (1)

When the Administrative Procedures Act was initially passed in 1946, Senator Pat McCarran-NV (D), hailed it as “a bill of rights for the hundreds of thousands of Americans whose affairs are controlled or regulated” by federal government agencies.

However, President Roosevelt had great reservations about its passage and commented that the practice of creating administrative agencies with the authority to perform both legislative and judicial works “threatens to develop a fourth branch of government for which there is no sanction in the Constitution.” (2)

“For taking away our Charters, abolishing our most valuable Laws and altering fundamentally the Forms of our Governments”
Declaration of Independence
July 4, 1776
When the BLM Las Vegas Field Office issued their final decisions for the wild horses held captive within the confines of the Nellis Military Base, BLM included procedures outlining the right to appeal their decisions as required by law. Yet according to IBLA, no member of the public had or has a right to appeal anything that goes on in Nellis because no one is legally allowed within the confines of the base. So if no member of the public had a right to appeal BLMs decisions here, wouldn’t their proclamation that the public can appeal their decisions be defined as fraud?

Based on the rulings of this “fourth branch of government” not beholden to Constitutional authority, these appointed employees of the Department of the Interior have legally stated that being an American citizen is not good enough to have “standing” to appeal taxpayer funded decisions with public resources (or to petition our government for grievances) and apparently, this isn’t the first time this argument has been used to slap the public down either.

Currently, the Earth Island Institute and other conservation groups have a lawsuit pending before the Supreme Court challenging the issue of “public standing”, administrative appeals, and the public’s rights to challenge administrative actions. (3)

While the initial issues that sparked this litigation have apparently been resolved, these groups felt the abuse of administrative rulings towards public rights was long overdue and ripe for challenge at the highest level.

"In every stage of these Oppressions We have Petitioned for Redress in the most humble terms: Our repeated Petitions have been answered only by repeated injury…. ”
Declaration of Independence
July 4, 1776
While the Supreme Court ponders the issues Roosevelt saw coming 50 years ago, government agencies continue to expand their authority aimed at public exclusion of public lands and resources as they increasingly operate as elite separate entities disconnected from the public at large.

In true irony, one such case is evidenced by National Park Services (NPS) recent announcement that the public is no longer “welcome” or will be allowed to view wild horse captures in Theodore Roosevelt National Park as NPS Superintendent Valerie Naylor declared public viewing has been “suspended”. (Click Here).

To learn more about the wild horses of the Badlands who somehow managed to be excluded from protection under the Wild Free-Roaming Horse and Burro Act, despite some pretty overwhelming evidence of their historical lineage, Click Here. 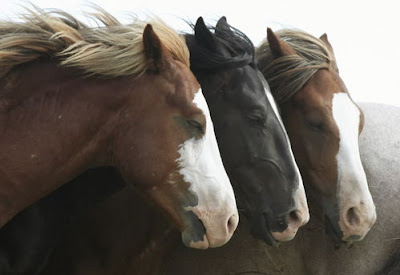 Wild horses of Theodore Roosevelt National Park
“We hold these truths to be self-evident, that all men are created equal, that they are endowed by their Creator with certain unalienable Rights, that among these are Life, Liberty and the pursuit of Happiness. — That to secure these rights, Governments are instituted among Men, deriving their just powers from the consent of the governed, — That whenever any Form of Government becomes destructive of these ends, it is the Right of the People to alter or to abolish it, and to institute new Government, laying its foundation on such principles and organizing its powers in such form, as to them shall seem most likely to effect their Safety and Happiness.”
Declaration of Independence
July 4, 1776

Any idea of who took the photo? I love it!

Thanks for keeping us updated!

Where are you? Are you on Facebook? Please find us: Petition to Save the Wild Mustangs. Love your blog. Great info.