The BLM Cody Field Office in Wyoming is requesting public input regarding the drilling of up to seven new natural gas wells, three of them proposed for the McCullough Peak Herd Management Area (HMA). The proposal is listed under the title of the Rocktober Drilling Project. (Click Here)

The McCullough Peaks HMA is one of the few nationally “dedicated ranges” supposedly devoted principally to wild horses but with a current allowable management level (AML) of merely 70-140 wild horses over a 109k acre range, one would hardly know it.

The AMLs were established in 1985, re-affirmed in 1992, ruled on by the Interior Board of Land Appeals in 1993 to maintain a population of 100 adult horses and then in 2003, when the State of Wyoming took BLM to court for failing to keep wild horse populations within their allowable range, the 2003 Consent Decree stipulates the wild horse herds are to “operate at the low end of AML but keep herd viable”. (1) (Click Here to view 2003 Consent Decree).

Despite BLM stating that only wild horse “ranges” are to be devoted principally to wild horses, the current livestock allocations total 5,772 Animal Unit Months (AUMs) while wild horse maximum use is 1,680 AUMs. So much for being the primary consideration….. 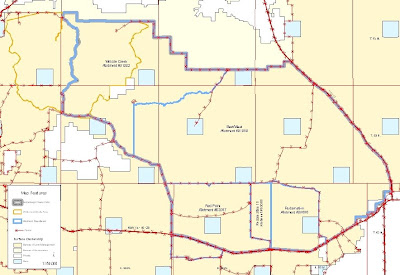 While BLM cites forage production is up, they simultaneously state rangeland health standards are failing in “some areas” due to wild horse use. While this is certainly possible, as BLM states most livestock grazing is dramatically down due to drought and “other factors”, citing only 16% livstock use in 2007, again the East-West Allotment mysteriously failed to be included in their analysis. (2)

Another note to ponder is McCullough Peaks is located in the Bighorn Basin, cited by National Park Service as having the potential to be a National Natural Landmark due to exceptional scenery and beauty as well as containing important archaeological cites, one of which is providing the most comprehensive vertebrate fossils of any rock in the world. (Click Here)

While forage production is being cited as up in the McCulloughs Peak HMA, BLM still plans to remove wild horses some time soon because they are “excessive” in relation to population levels established over 21 years ago while BLM is simultaneously now conducting prescribed burns throughout the Bighorn Basin to reduce “flammable fuels”, aka, excessive forage. (Click Here)

Another serious concern regarding the McCullough Peak wild horses and further habitat fragmentation is due to recent advancements in determining genetic viability with the “low” AML range of merely 70 wild horses considered a high risk for inbreeding due to their isolation from other herds.

Remember the Silver Peak HMA in Nevada had cited genetic tests found possible signs of inbreeding in those wild horses and this fact was used as support for BLM opting to zero out the HMA completely. In the fall of 2006, BLM removed 143 wild horses during their last and final gather – three more than the McCullough Peak “high” allowable management level…. (3)

Of further concern is BLM's Wild Horse and Burro Specialist stated trial runs used in a computer software analysis known as Population Modeling caused the results of the first time trial runs to be questioned due to “extremely low values shown especially regarding growth rates.”

There is also the startling revelation that experimental fertility control pellets were used on most of the remaining McCullough Peak mares after the last removals in 2004 and since then, 16 of 34 mares have failed to reproduce at all. (4)

Now BLM wants to add additional oil and gas wells within the area, which may cause even more fragmentation, fencing and disturbances to this increasingly fragile and celebrated wild horse population as well as to a nationally significant landscape worthy of monument status.

If that weren’t enough, recent scandals rocking the Department of the Interior through documented abuses of rigging bids to support corrupt proposals in oil and gas leases, ethics violations, and multiple conflict of interest abuses among BLM employees and oil and gas lease applicants (Click Here) or BLMs failures to monitor excessive pollution levels for six years leading to damage of habitat and wildlife in Wyoming (Click Here) make the new drilling proposals in McCullough Peak seriously suspect of also being linked to backroom deals whose only aim was to serve corporate interests at the expense of everything else BLMs suppose to be protecting for the public and our nation.

So please consider adding your voice to support the McCullough Peak wild horse herds, sensitive wildlife species in the area such as important sage grouse nesting grounds and urge BLM to protect this extraordinary landscape from future exploitation. Once disturbed, it is believed the ecosystems within this area could take decades to recover, even with epic mitigation efforts. To learn more about what is at stake, Click Here to read this recent opinion peice by David Dominick.

Request that prepare an Environmental Impact Statement and not settle for a smaller EA, re-evaluate all previous documents associated with the Rocktober Drilling proposal that may have been tainted by corrupt DOI employees as well as BLM using this opportunity to develop plans for the McCullough Peak wild horses as the “principle consideration” as clearly stated in P.L. 92-195, The Wild Free-Roaming Horse and Burro Act.

This would include re-establishing more viable populations until they are no longer at risk of inbreeding and/or crashing due to extreme or harsh weather, reducing livestock authorizations until stable herds can be assured, remove fences wherever possible, and provide appropriate plans to counteract any negative impacts new wells and their developments will have to these historical wild horses and their range if BLM ultimately approves all the wells and pipelines now proposed.

Be sure to include the Rocktober Drilling Project in the title of your submissions and please be aware that all personally identifying information becomes part of the public record and may be available for public review.

Posted by Preserve The Herds at 6:22 PM

wonderful blog..
I have added you to my favorites to visit..