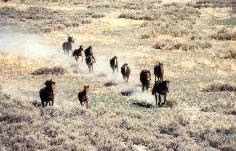 Part I
After two years of legal wrangling, BLM announced Thursday that Washington has "affirmed" their decision to permanently eliminate Colorados West Douglas Wild Horse Herds (though BLMs failed to specify who in Washington finally dropped the axe on the West Douglas wild horses). (1)

The West Douglas Herd Area currently spans 128k public and private acres and was one of seven “federally protected” wild horse habitats identified in Colorado at the passage of the 1971 Wild Free-Roaming Horse & Burro Act. However, BLM has only granted four of the original seven an HMA status that still allows wild horses. (Note- HMA status is always subject to being reversed despite supposed permanent federal protection) (2)

With another zeroed out herd being “affirmed”, BLM announced they will immediately begin to develop the final removal plans for the estimated 120 remaining wild horses.

BLM attempts to compensate for this decision by citing the 190k acre Piceance/East Douglas Herd Management Area is better suited for wild horse management and as a result, BLM raised the allowable management level from 140 to 235 wild horses to help offset the permanent extinction of the West Douglas herds.

Of course, no wild horses from the West Douglas Herd Area will be moved to the Piceance/East Douglas HMA and all are slated for the adoption pipeline, long-term holding facilities or unconditional sale.

The central focus of BLMs decision to revoke their federally protected status stemmed from officials determining the 128k acre habitat is only capable of supporting 60 wild horses. BLM then acknowledged this population is too small to be naturally self-sustaining or genetically viable.

According to the Animal Welfare Institutes recently released book, Managing For Extinction, 1971 found 317 BLM Herd Areas originally identified as federally protected wild horse and burro habitat. Today, BLM cites only a 199 Herd Management Areas are suitable for wild horse and burro use, a loss of 118 herds. (3)

Though the best available science states that wild populations need to reach at least 150 individuals to preserve the herd, this “official affirmation” has now established a precedence allowing BLM to zero out herds solely on the basis of AMLs set at 60 or under.

So today’s million-dollar question is….

Of the 199 HMAs remaining, how many wild horse and burro herds have been given an allowable management level of 60 or less?