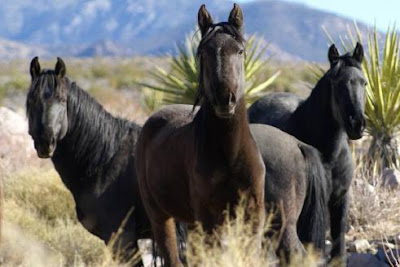 The Nevada Wild Horse Range, a.k.a. Nellis, is in the news again. This time BLM will be doing an “official” roundup in December and the public has three options to choose from.

Alternative 1: The Proposed Action:
Remove 800-820 wild horses and leave 300. Of the 300, 150 mares will be treated with PZP again, even though BLM reports the 2003 treatment only changed the reproduction rate from 24% to 22%.
What's really curious is that BLM reported the Nellis wild horse population jumped from the 600 BLM left after the roundup to 780 the very next year. That's a 30% reproduction rate in my book but maybe BLM uses the metric system.

Alternative 3:
Not remove the wild horses. Of course we all know what this means - terrible, terrible things will happen. Wild horses will starve, they will leave a wake of devastated forage everywhere they go, riparian areas will be obliterated, the entire area will be trampled to death, stream banks will become mud holes, they will leave trails that make our freeways look like parks, soil will become like cement due to their hoof compaction, blah, blah, blah.

A few tasty new ones were added this time, including the military has been hauling water to the Nellis horses for over 2 years costing $12,000 a month and BLM is visiting the area weekly to monitor lame foals, some of which need to be captured and treated at an estimated cost of $500.00 per foal.

Apparently, the Nellis wild horses are prone to clubfoot and for the first time ever, BLM is visiting them weekly to insure their health. Isn’t that nice?

Of course, while they are out there they don’t fix the many “old/less functional water developments” and it is unclear if they have followed through with their 2003 promise to apply for water rights for the Nellis wild horses. One would think since it's been costing $12,000 a month for two years, BLM would have made securing water a top priority.

If anyone’s wondering why so many wild horses are being taken, it’s because BLM changed the “allowable management level” (AML) in 2004 by cutting it in half.

When BLM was doing the evaluation in 2003, their “Proposed Action” was to keep the AML the same (600-1000) but at the last minute, they changed their minds and approved these new, lower numbers (300-500). That’s why the Nellis wild horses are now considered “excessive”.
Let's try not to remember the 178 wild horses already removed in July and 71 more now dead from drinking the water.

Also, for the first time ever, BLM doesn’t want to discuss Southern Nevada's thriving ecological balance lest the public become aware of the fact that the “Sensitive Species” big horn sheep given such top priority in management decisions will now outnumber Southern Nevada’s wild horses by over 3-1 and their wild burros by over 5-1.

So take your pick-
(a) remove them and shoot them full of PZP, which doesn’t seem to be very effective as a fertility control but perhaps there’s other advantages to using it we are not aware of,
(b) remove them and still shoot them full of PZP but castrate a bunch of the stallions, or
(c) ask BLM to not remove them and be told that this can’t be done because wild horses are in terrible, terrible danger...or is it the range is in terrible danger or is it…well anyway, something’s in danger somewhere so the Nellis wild horses need to go to Palomino Valley to keep everybody “safe”.
To view the Nevada Wild Horse Range Preliminary Gather Plan and Environmental Assessment (EA NV-052-2007-362) go to: http://www.blm.gov/nv/st/en/fo/lvfo.html
Public Comments are due by October 17, 2007
Be sure to include EA # NV-052-2007-362 in your response.