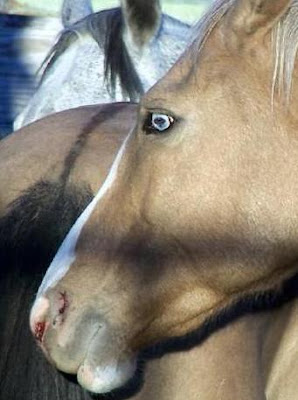 The Bureau of Land Management (BLM) has posted an information sheet about the recent deaths of 131 Jackson Mountain wild horses at the Palomino Valley holding facility. (1)

BLM reports that in addition to the salmonella outbreak, wild horses had also contracted pneumonia with 9-12 still being treated and 16 pneumonia related deaths so far.

Many of the answers BLM supplies continue to raise questions, which include health conditions, treatments, capture methods, reproductive rates, livestock grazing, forage availability and lack of reliable population reports since the removals of 661 Jackson Mountain wild horses in 2003.

BLM stated that the Jackson Mountain wild horses came in with snotty noses due to alkali dust from drought conditions and that no illness or deaths were a result of the capture operations.

Yet this photo with blood coming out of this wild horses nostrils was taken at the temporary round up pens after helicopter removals conducted in the fall of 2006 and indicate that serious respiratory damage is immediately occurring to wild horses during the helicopter roundups without "drought conditions".

A variety of questions and concerns were submitted to BLM during the public comment period for the Jackson Mountain wild horse gather plan, including a copy of a recently released report, The Use of Helicopters To Remove Wild Horses and Burros From Public Lands, a team effort compiled by a wide variety of wild horse advocates and concerned citizens that BLM choose to ignore.

Concerns raised included BLM failing to consider the consequences of driving the Jackson Mountain wild horses by helicopters over very rugged mountain terrain with no specified limits on distances being run as well as failing to give priority to humane handling procedures over efficiency. These concerns were expressed for healthy horses, not horses already severely weakened.

There is also questions how wild horses dropped to such a low body score in merely a matter of 7-10 days before they were captured while BLM reports the remaining wild horses on the range are in “good condition”.

Then there is the question about BLM now stating that the Jackson Mountain wild horse reproduction rate over the last four years ranged from 15-20%. Yet the reproductive rates reported in the Preliminary Environmental Assessment through the Population Modeling software reported a 30.6% reproductive rate without the use of fertility control and a 23.4% reproductive rate with the use of fertility control. (2)
This was one of the reasons BLM used to justify why immediate removals were necessary but that was before the new June census found 700 more horses in the area – then that became the new reason immediate removals were necessary.

Another well-worn quote used is “resource monitoring data” indicated an overpopulation existed in the area due to “excessive utilization”.

For the record, the “thriving ecological balance” of forage allocations that BLM has determined “appropriate” for the grazing allotments impacting the Jackson Mountain HMA is 7,426 cattle and 482 sheep with a maximum allowable population of 217 wild horses. (3)

BLM has acknowledged that each of the “approved” wild horse population per livestock grazing allotment was not considered genetically viable but cited the “meta-population” as a whole insured their genetic vigor while simultaneously stating that the 79 miles of fencing found within the HMA severely inhibited genetic interchanges.

The Jackson Mountain Gather Proposal stated no further fencing was planned but the Happy Creek grazing allotment assessment published just a month prior reported a proposed three mile fence around Happy Creek would have severe impacts to wild horse populations, including limiting genetic viability, sharply increasing competition with livestock, further reducing available forage and possibly causing injury or death. (4) Hard to believe BLM has specific regulations that prohibit extensive fencing in wild horse and burro habitat.
Happy Creek itself is also preparing to introduce the Threatened Lahonan Cutthroat Trout, which will most likely result in further reductions in the “allowable management level” of the Jackson Mountain wild horses because it is general policy to not allow any wild horses in areas where Threatened or Endangered Species live, even if the horses were there long before managers formulated new plans to introduce these species.

One of the questions BLM was legally required to ask during the capture plan assessment was, “Is the proposed project subject to valid, existing rights?”