What NBU Is Doing For You

NBU stands for Nevada Bighorns Unlimited and they are a wildlife organization based in Reno Nevada that focuses on the expansion and introductions of bighorn sheep.

NBU has recently posted an article titled, “Wild Horses on the Sheldon National Antelope Range” on their home page.
In it, they urge sportsmen to unite to block animal rights groups from establishing wild horse and burro herds at Sheldon and urge their members to contact federal officials to protest any continued presence of wild horses and burros at Sheldon.

Apparently NBU strongly objects to the idea of wild equids being considered wildlife and argues that that they are much more destructive than domestic cattle. They also issue population estimates of 1,800 to 2,000 “in the last few years” with the current estimate of 800 as a result of removals and adoptions.

Nevada Bighorns Unlimited finishes up their call to arms by stating that “Horse advocates have demanded the Refuge be opened up for wild horse and burro use”, that the only way this can be defeated is through overwhelming opposition, and to leave “emotions and innuendos to the opposition” (this means wild horse and burro advocates) when they write their representatives to protest.

*According to USFWS, wild horses were documented in the area before Sheldon became a wildlife refuge in 1931. Local ranchers managed horses there by mixing domestic horses with the original Spanish horses of the area (who have a documented presence dating back to the 1500’s) because Sheldon was a stocking and Cavalry Re-Mount location during the late 1800’s and early 1900’s.

Wild horses didn’t just “happen” in the 1980’s due to pressure by wild horse advocates nor is it about to be “opened up” for wild horse and burro use as NBU tries to imply – wild horses have a longer history and presence at Sheldon than the existence of the Refuge itself.

*NBU’s states that USFWS “original management policy excluded wild horses and burros." At the passage of the Free-Roaming Wild Horse and Burro Act in 1971, Sheldon National Wildlife Refuge was co-managed by both BLM and USFWS and neither agency was really clear who had jurisdiction over what until Congress formally made a decision that USFWS would become the sole managing agency in 1977.

*In 1977, former managers created the Horse and Burro Management Plan that acknowledged the Sheldon wild horses as historic, that they were a distinct and unique population, referred to them as free-roaming versus the feral non-natives of today’s management crew and accepted that they were now USFWS responsibility to take care of - that is why wild horses and burros are still allowed on Sheldon. USFWS had no formal policy on wild horses and burros in the Refuge System until 1982 - after the approval of management plans for wild equids that still stands today.

*These same managers reported that overgrazing by livestock had so completely damaged the area that recovery to the native ecosystems probably could not be accomplished in 40 years. Then they turned around and authorized the most livestock grazing in the history of Sheldon, peaking in 1985 before swinging the other way and eliminating grazing completely.

*Nevada Bighorns Unlimited population estimates are a stretch at best. The cited 1,800-2,000 was before the disastrous round up featured on American Wild Horse Preservations Campaigns Section, The Reality of Round Ups. Click Here to read the full story with graphic photos of what really went on!

*As NBU stated, the wild horses removed during that June 2006 gather did reduce wild horses through adoptions but in May 2007, when USFWS released their plans to remove more, they estimated 1,200 wild horses and 100 wild burros remained before the new foaling season, which would bring the new estimates to 1,500-1,600.

A month later in June 2007, Nevada Bighorns Unlimited financed a “new” aerial census for Sheldon managers that found 700 wild horses missing from the Refuge - only 800 were now remaining. For more about USFWS explanations of where the missing Sheldon wild horses have gone, click Here to read The 700 Club.

Additionally, when Nevada Bighorns Unlimited President Jim Nelson was asked about NBU’s zero tolerance policy for any number of wild equids at Sheldon, he has so far declined to comment. 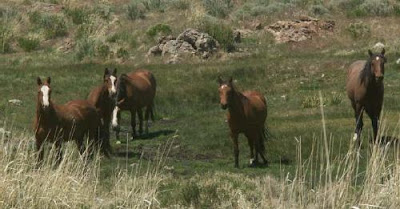 Posted by Preserve The Herds at 3:03 PM