"Doing Everything We Can"

As Chief Investigative Reporter, George Knapp and the I-Team of KLAS 8 in Las Vegas, Nevada ask hard questions about what BLM is doing to help our now captured wild horses and burros find good homes through adoptions, Mr. Knapp's Interview with Nevada Wild Horse and Burro Lead Susie Stokke shows her confidently assuring us that, “If you look at what Nevada is accomplishing compared to other states, we are doing everything we can.”

So is this true? Not according to the Nevada Commission for the Preservation of Wild Horses. Here is what they had to say in the Commissions April 7, 2005 Meeting Minutes.

In discussing the Prison Wild Horse Training/Adoption Program, Ms. Cathy Barcomb, long-time administrator for the Commission reported that, “The last prison adoption had been extremely successful with all horses adopted averaging $1,500. She reported that the new indoor arena had been dedicated for opening and that almost all of the Commissioners had been present for the ceremony. Ms. Barcomb noted that the Bureau of Land Management had recently met with prison officials and stated that they could no longer afford the prison program or adoptions in Nevada as their focus was primarily to place all funding towards removals of wild horses from public lands in an attempt to reach AML.”

She also added, “BLM was reducing the number of BLM supported adoptions to 3 per year instead of 4. She added that she felt BLM has not generally been very cost effective in their approaches to wild horse adoptions. She stated that there were usually 5-6 BLM personnel at each prison adoption, being paid overtime, and that it was unnecessary to have so many people there, which drives up the costs.”

Commissioner Gleason stated that she felt BLM was spending more with no accountability.

Ms. Barcomb reported that, “In 2004, that the Expo and Department of Agriculture transported all the prison horses to the Expo adoption, not BLM, the volunteers and Dept. of Agriculture had also transported and set up all the panels for holding the horses, not the BLM. She stated in general, that BLM really didn’t have to put any effort into the marketing, transport, promotions, care, feeding, or adoption of the prison trained horses that they just had to show up and collect the funds. But for 2005, the BLM has declined to allow any BLM horses, prison trained or not, to be adopted at the Expo.”

Ms. Barcomb also stated, “The BLM Nevada would not be actively participating in the Western States Wild Horse and Burro Expo either. They would not have prison-trained horses on site, nor would they be doing an open house at the Palomino Valley Corrals.”

Commissioner Evans stated that, “He was disheartened by the fact that BLM has approximately 28,000 horses in holding facilities, that its costing taxpayers a fortune, that the solution to the problem IS adoption, and cutting back on the adoption program shows a serious lack of judgment as to what is needed for a comprehensive working program.”

Commissioner Brehm stated, “Adoptions hosted around the National Final Rodeo in Las Vegas were a good event and that almost all the horses were adopted in the previous years when BLM hosted adoptions there, but that it has been over 10 years since they did the NFR adoptions."

Mr. Cassas expressed his frustration in that “nothing has been done since the report and recommendations have come out.”

Commissioner Evans stated, “We’ve been talking about this with BLM for over 5 years…..now it’s 5 years later and nothing. You can spend millions of dollars on study after study, and nothing ever happens.”

Meanwhile, when George asks Ms. Stokke, “You would say the BLM has done its best to market to Nevadans in adopting wild horses?”

Stokke replies, “I think that we are continuing to explore new opportunities and new avenues..." 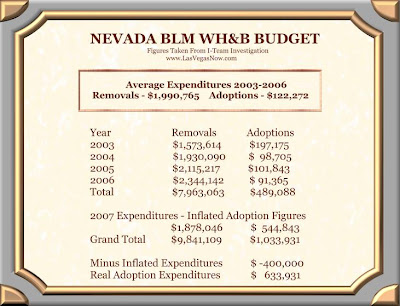 Posted by Preserve The Herds at 6:01 PM