Year Of The Horse II 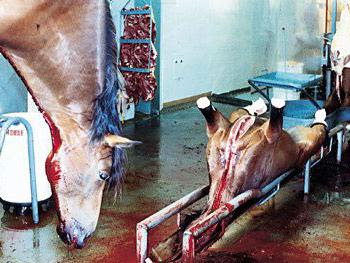 The second big event that happened in 1998 was a Congressional Subcommittee Hearing of National Parks and Public Lands held in Reno, Nevada on July 13th titled, Field Hearing on Range Issues and Problems with the Wild Horse and Burro Act and Its Implementation.

It was here that a handful of men began laying the groundwork to amend the Wild Free-Roaming Horse & Burro Act to include a “Sales Authority” clause to allow them to be slaughtered as well as exploring all possibilities for disposing of America's “excess” wild horses and burros.

The need to grant BLM the authority to slaughter America’s wild horses and burros was openly discussed by many with testimony citing them as merely feral “like alley cats” and that BLM needs to be able to manage them as livestock, a position supported by then BLM Director, Pat Shea.

Nevada rancher, Demar Dahl, offered this practical insight by stating, “We eat them. The horse is a resource….I love good horses, but there are a lot of horses that are just to be eaten and that is their best use…..And I can tell you right now, there are a lot of wild horses, BLM—horses with a BLM freeze iron under the brand, that go through the sales to the killer plants today. And any horse sales that you want to go to where they put killer horses through, you will find a number of wild horses….So it is happening already, we just need to recognize it.”

John Balliette, Contractual Natural Resource Manager from Eureka County, Nevada stated,“Some real double standards exist when it comes to sale authority. Each year our country sells thousands of privately owned horses for slaughter. But the mere mention of sale authority of ''wild'' horses with the possibility of slaughter is offensive to some. Horses are the only large ungulate on Federal lands that are not harvested for consumptive purposes. If harvesting one large ungulate is acceptable, why is harvesting horses unacceptable? Horses must be viewed as are other large ungulates on Federal lands, a renewable resource that can be effectively managed by harvesting excess numbers.”

Senator Dean Rhoads, Chairman of the Senate Natural Resources Committee for the Nevada Legislature and a rancher himself led the charge to implement a Sales Authority with such statements as, “I usually do not go to the sales yard so I have no idea who buys them, but I assume that some of them are bought by people that take them home and break them. Others are probably bought that ends up in the slaughterhouse. But that is just the thing that we have been doing for centuries.”

Nevada Lincoln County Commissioner Rey Flake reminded everyone that “Ranching on public lands is also a legacy of the west” and presented this vision to Congressional representatives for his model of what the Wild Horse & Burro Program should look like, “We need to consider the idea of having one or two herds of horses in each state.”

Senator Rhoads supported Commissioner Flakes statement by affirming the idea for a few public-viewing centers citing “…we would probably put up some vistas and interpretive centers and so forth” then also added, “Then you could remove all the other horses from the west on much of our grazing lands.”

Current Nevada Senator John Ensign, who introduced S. 1915, a bill to amend the Horse Protection Act to prohibit shipping, transporting, moving, delivering, receiving, possessing, purchasing, selling, or donation of horses and other equines to be slaughtered for human consumption, and for other purposes, was also present as a Congressional Representative at this 1998 Field Hearing.

Representative Ensign made no comment throughout the proceedings regarding the selling of America’s wild horses and burros for slaughter. His statements were limited to,“How much of the policy is actually being directed based on pure emotionalism? How much of the policy is being directed on what is truly best for the environment, best for the animals in the long-run for the overall part of the population, and truly how are we getting to where we are going….?”

As politicians and cattleman lined up to testify against the wild horses with arguments that ranged from how their “excessive numbers” destroy the range and riparian areas, strip the forage for their livestock, and threaten true wildlife species such as bighorn sheep, they never failed to grind the ever popular axe of wild horse and burro management costing the taxpayer a fortune by being nothing more than a “Federal welfare case” - (Representative Jim Gibbons).

Utah Representative James Hansen stated, “If any public land program could be called a subsidy, this would be it.”
While these cattleman were arguing against the costs of the Wild Horse & Burro program and how public land is really their land, USDA Records shows in 1998, almost $2.7 million dollars was handed out in federal subsidies in Nevada and exceeded $62 million dollars between 1995 and 2005 for Nevada ranchers and farmers alone. This does not take into account that a rancher is currently paying less than $1.35 per month per cow to graze them on public lands -1/10th the cost of private grazing fees.
USDA federal subsidies records also shows NV Senator Dean Rhoads of Rhoads Trust Dean & Sharon have personally received $500,875 dollars between 1995 and 2005.

This Field Hearing was conducted one month before the Nevada Draft Management Plan for Wild Horses was introduced (see last post, Year of the Horse I).
During this field hearing, Cathy Barcomb, Administrator for the Nevada Commission for the Preservation of Wild Horses reported to these Congressional Committee members that the Draft Management Plan for Wild Horses for Nevada was due out in August adding, “..a lot of people that are in this room helped us write the plan and I think it is a good compilation from Nevada.”
Posted by Preserve The Herds at 5:53 PM