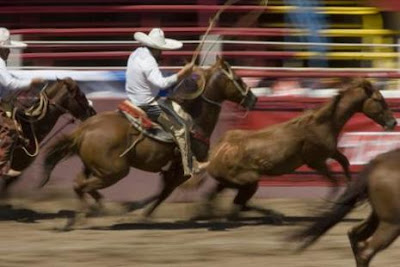 It was New Mexico law enforcement agents that began investigating the selling of wild horses to slaughter in 1992. This investigation centered around the direct participation of BLM employees and contractors selling wild horses for slaughter with both the knowledge and approval of BLM managers. Their scheme involved the use of satellite ranches and horse sanctuaries to hide the horses for profit operation. (1)

The Grand Jury investigation into illegal wild horse slaughter began with two BLM employees: Mr. Galloway and Mr. Sharp, both working under the direction of Steve Henke, currently still employed by BLM as a District Manager in Farmington, New Mexico.

In 1995, the Grand Jury issued subpoenas intending to inventory more than 1,200 horses at a BLM sanctuary in Bartlesville, OK but a Department of the Interior lawyer in New Mexico, Grant Vaughn, wrote a letter telling the prosecutor that his agency could not comply with the subpoenas and efforts to access any information about these facilities was successfully thwarted. (2)

Over ten years later, a different investigative report has just been released by Valerie James Patton, which includes some serious questions surrounding BLM sanctuaries in Bartlesville, OK and the more than 8,000 geldings these sanctuaries now hold.

Ms. Patton’s Investigative Report centers around an anomaly of exclusive gelding exports from the Santa Teresa Livestock Port of Entry between New Mexico to Mexico, where USDA export records indicate record breaking levels of geldings have been, and are still being sent to Mexico under a “non-slaughter status”. The current total of these non-slaughter geldings shipped into Mexico has now reached over 3,000 for this year alone.

Her report on the possible illegal shipment of these horses compares the Texas export numbers of non-slaughter geldings with the Santa Teresa Port’s export numbers, notes that Santa Teresa does not send any other kind of horse through their port under a non-slaughter status and asks hard questions about what Mexico is doing with these geldings that are now numbering into the thousands, as they are obviously not for breeding purposes.

Furthermore, her report states that the only currently known source for such a continuous supply of geldings is BLM sanctuaries. The report gives significant treatment to statistics, numbers, locations, interviews, newspaper articles, government connections between U.S. and Mexican officials, and as the evidence mounts, a powerful case is presented which demands an official investigation into the both the source and the destination of these non-slaughter geldings.

Except it looks like that is going to be very difficult…..

Her report also includes the results of a recent on-site investigation by Animals’ Angels investigators who were denied access to Santa Teresa’s facilities and what little information New Mexico officials offered turned out to be false - these officials included USDA employees. Yes, this is the same USDA that flipped Congress the finger when they voted to withdraw funding for horsemeat inspections in efforts to shut down the American horse slaughter trade in 2006.

In another AP news article by Martha Mendoza published in 1997, Trail’s End for Horses: Slaughter, over 200 BLM employees were cited as adopting wild horses and burros with most unaccounted for and some employees acknowledging they were sent to slaughter while Pascal Derde, the proprietor of Cavel West Slaughterhouse in Redmond, OR, reportedly "displayed a sheaf of BLM certificates for horses he recently butchered".

Gabriel Paone, a Department of the Interior ethics official was quoted as saying there was nothing wrong with BLM employees adopting wild horses and then selling them for profit. "They’re not doing this as public officials." Paone said. "They’re doing this as private citizens."
In an article by American Wild Horse Preservation Campaign, The Story Behind The Burns Amendment, a plan is outlined showing which way American wild horses were headed. “A few years ago, a Montana rancher proposed to send 10,000 wild horses to Mexico, the second largest horse meat supplier in the world, for his private enterprise craftily dubbed the "Sonora Wild Horse Repatriation Project."

Apparently, the boldness of this proposal created so much opposition it was ultimately defeated - perhaps an even craftier enterprise was needed to move our horses into Mexico.

The political consequences of openly killing wild horses and burros was foreseen during the July 1998 Field Hearing held in Reno, NV (see Year of the Horse II) as John Balliette, Contractual Natural Resource Manager, Eureka County, NV stated, “I also urge you to be cautious with euthanasia, especially for large reductions. Personally, I would view putting thousands of horses down as a terrible waste of a resource. I also believe the first time several hundred horses are euthanized in one spot, a political firestorm will follow”.

Needless to say, Mr. Balliette was correct but it didn’t take several hundred to do it.

In November 2004, the Burns Amendment was “slipped in” and became a reality for our wild horses and burros in 2005. Forty-one wild horses were slaughtered in an Illinois slaughter plant, some of the first sold under this new For Sale Authority and public outrage caused BLM to temporarily suspend sales between April 25 thru May 19, 2005.

BLM also rewrote and strengthened the adoption contracts before resuming sales but considering past historical violations, even by the agency itself, as well as no true legal consequences to those who violate these contracts due to Congress continuing to give BLM the authority to sell them “unconditionally”, there is little hope that violators will actually be prosecuted if our horses and burros end up hanging from a hook.

Advocate and watch dog groups have been requesting details about the For Sale Program but meaningful answers have not been forthcoming and the BLM only publicly provides a running total of the wild horses and burros that they “sell”.

Unprecedented numbers of wild horses and burros have been swept off public lands authorized by completely absurd assessments, BLM cut adoption events over the last few years during a time when they needed this outlet most, the cost of capturing and holding our wild horses and burros in these mysterious sanctuaries continues to skyrocket and suddenly we find New Mexico in the news - again!

Yet Congress sits stalled – refusing to investigate the Wild Horse & Burro Program or demand accountability, refusing to repeal the Burns Amendment, and refusing to open an investigation into these non-slaughter geldings being exported from New Mexico at record levels.

Some speculate these geldings are being shipped to Mexico as unwilling participants in a popular form of Mexican entertainment called Horse Tripping, as illustrated in the header photo. Even so, most horses used for these events end up in Mexican slaughterhouses once the ropes have cut their flesh too deeply or their legs finally brutally break.

The Humane Society of the United States has recently released a video on the reality of Mexican Horse Slaughter, often performed by repeatedly stabbing a knife into the horse’s spinal cord until it is paralyzed, though not unconscious for its slaughter. There is little question the final destination of the majority of these “non-slaughter” geldings will share the same fate of those so graphically depicted in this video.

In 1998, Mr. Balliette also recommended a sale authority that would be “sunsetted” once the numbers on the range and in the adoption pipeline were brought down to manageable numbers before more “politically correct” population control methods were again employed.

Maybe Congress is waiting, as Mr. Balliette suggested, until a sufficient amount of America’s wild horses and burros have been “disposed of” before bringing the vote to the floor…. or maybe they will never repeal it - after all, it’s only the majority of the American people who so passionately love wild horses and burros and have showed their overwhelming support time and time again for mandating their protection – but does anyone in Washington care?
Tell Congress to stop stalling and protect
OUR WILD HORSES AND BURROS
!NOW! 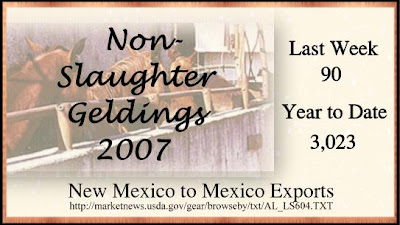 In efforts to bring awareness to the weekly shipments of these Non-Slaughter Geldings being sent to Mexico from New Mexico for over two years now, the American Herds Hot News Section will now display their weekly exported totals until -we pray -these shipments are investigated and finally brought to a halt.