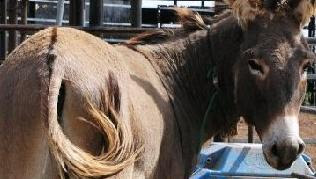 The Commissioners statements in the NVCPWH April 2005 Meeting Minutes* can only leave us wondering….

Why would BLM cut adoption events or refuse to supply wild horses and burros to events where “all they had to do was collect the money” when holding pens were bursting at the seams?

In 2001, when BLM launched the most aggressive wild horse and burro removal campaign they had ever undertaken, didn’t they know what would happen?

Did they have a plan on how to deal with tens of thousands of wild horses and burros now crammed in government pens at taxpayers expense?
The Plan
“The plan developed by BLM was to escalate removals to balance public lands and achieve AML (Allowable Management Level). At the same time the Fleishman-Hillard study had introduced some very innovative changes to the adoption program.”

“The whole concept was introduced to Congress to bring public lands down to AML. BLM asked Congress for an additional 36 million dollars over 4 years to implement their new plan because they knew they would be taking approximately 12 thousand wild horses off of public lands per year, BLM knew they could average 7,000 horses per year in the adoption program, they knew there would be approximately 5,000 horses in excess each year.”

“They knew it and planned for it. They knew that by the fourth and fifth years that they would have 20,000 horses in holding, that’s what the extra funds were for. The concept was that after BLM got to AML that only 3,500 to 4,000 horses per year would be removed from public lands and with a demand of over 7,000, the BLM would then start removing them from the sanctuaries and place them in the adoption program.”

“The whole plan was to balance itself and greatly reduced the costs because you would then be lowering the costs of holding horses in sanctuaries, you would only be removing 1/3 the number of horses on public lands and reducing that cost drastically, and you wouldn’t be holding or processing as many horses because they would be adopted. The whole plan was a good one, Congress endorsed it, and now, we are there, we are within one year, they got all the horses in the sanctuaries, as planned, and then voted into slaughter all of them.”

“I feel it was somewhat of a setup, we were betrayed. We all bought into the plan and supported it, only to be turned on once the horses came off the lands.”

So what happened?
*See last post, "Doing Everything We Can"
Photo taken from BLM Internet Adoption Site http://www.blm.gov/
Captured Wild Burro from California Slate Range 2007
Posted by Preserve The Herds at 9:16 PM