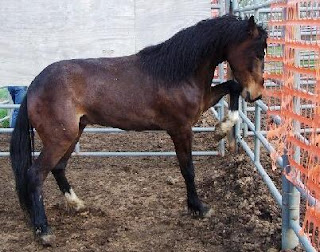 On August 2, 2007, the Interior Board of Land Appeals, 172 IBLA 128 ruled that there is nothing in the Wild Free-Roaming Horse and Burro Act that prohibits the BLM from augmenting non-self sustaining herds to prevent inbreeding.

Based on BLM provided studies, Administrative Law Judge, T. Britt Price declared that "only 50 breeding animals are necessary for genetic diversity" and goes on to say, "Appellant seemingly argues that the need to augment the herd by introducing breeding mares demonstrates that the horses of the Red Rock HMA cannot be considered either healthy or self-sustaining under the new AML" (Allowable Management Level for the Red Rock wild horses was established in 2004 at a range between 16-27).

The Interior Board of Land Appeals (IBLA) oversees administrative law for the Department of the Interior and is available at no cost to anyone who wishes to appeal a decision by public land managers. The catch? It is up to you to provide a preponderance of evidence that clearly shows managers erred in their decisions.

Judge Price, who issued the decision stated,"Neither the Act nor regulations uses "uniqueness" as a standard in managing wild horse and burro populations"

In case you are wondering what the Appeal was about, here are the main contentions of Lappin's argument to the Court;

Director Lappin closed her argument with, "WHOA therefore contends that BLM should have established a zero AML for the wild horses of the Red Rock HMA."

Is she for real with a name like Wild Horse Organized Assistance?
While WHOA charged in to court aiming to set a national policy regarding the genetic viability of our herds (of which she seemed to be shooting for zero), she came to the fight empty handed and presented nothing to support or counter the Department of the Interior's statistical reams or crack legal teams.

BLM has now been given legal license to give even more forage to livestock and big game because all they have to do is add a horse, any horse from any where, and PRESTO! they are a now an "American Mustang".

To learn more about the crisis of genetic diversity and future viability now facing many of Americas wild horse and burro herds, go to American Wild Horse Preservation Campaign

Posted by Preserve The Herds at 1:06 AM

INO Dawn has always been on the BLM's side. This is an ANOTHER outrage.
Now what can we do about it?

Correction INO should be IMO