Hero Of The Herds II 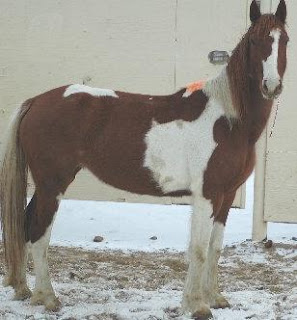 Part II
As promised, Chief Investigative Reporter, George Knapp and the I-Team of KLAS 8 in Las Vegas, NV have followed up their first investigative story, No Straight Answers on Wild Horse Budget (Part I), with an in depth look at questions on how BLM determines our wild horses and burros need to be removed.

Today, with more wild horses in government pens than now roam free, millions of dollars being spent the last few years for their removals and millions more now spent to feed them, Mr. Knapp asks whether BLM has any justification for corralling them in the first place.

“So how does BLM justify the round ups? Usually by claiming the horses are a threat to the health of the range. The question is – can they prove it?”

So the Knappster begins his quest for answers as he and the I-Team examine the 40 million acres under BLM control in Nevada, the recent Jackson Mountain HMA round up that led to over 150 deaths in BLM's Palomino Valley holding facility, the 8,000 livestock that have been approved to graze the Jackson Mountain home range area, and allegations by national BLM scientists who have accused BLM of politicizing range science to benefit ranchers, miners, and oil companies on public lands.

In an interview with Craig Downer, once employed by BLM as a range scientist but claims he quit in disgust, Mr. Downer grew up watching wild horses near his Northern Nevada home and stated, “It’s very skewed data, very arbitrary statements. They’ll just come out and say that wild horses are a detriment to the ecosystem without any proofs."

He further added,“How can you say the several thousand horses that remain in all the west compare with several million livestock? It’s just ludicrous”.
Mr. Downer feels that most of the information used to justify many of the round ups is “bogus”.

In another interview with long time wild horse advocate Jerry Reynoldson of Wild Horses 4 Ever, the Knappster found continuing support for the position that BLM uses bogus information to justify the round ups.

“What I really think is there is no science” Reynoldson said. “It has little to do with range conditions and a lot to do with we just want to get them out of here….Nevada BLM basically makes it up as it goes along.”

While questions continue as to how BLM has justified the removals of thousands of wild horses and burros from public lands, the millions of dollars being paid to those who remove and feed them, and little being budgeted towards their adoptions, is it any wonder the I-Teams choose “Nevada’s Wild Horses Face Desperate Future” for part two of their look at America’s remaining herds.

Kudos to Mr. Knapp and the I-Team for working to expose the truth behind this American tragedy as these living symbols of freedom are once again “fast-disappearing” - this time funded out of the government trough.

Comments to Chief Investigative Reporter, George Knapp can be emailed to gknapp@klastv.com
The photo used was taken from the Palomino Valley Internet Adoption site five days after BLM began conducting the Spring Mountain round ups based on "BLM formulas" that determined they "might starve or become thirsty in the future". This horse was one of the 864 wild horses and burros BLM removed from the area in January 2007.

www.lasvegasnow.com
Posted by Preserve The Herds at 11:48 AM